And I thought, Hey, that's cool. The Edge: I was told that they wanted to go after the guitar not just in technical terms; they wanted to explore the reason why people pick up the instrument - what is it about the guitar that offers people the opportunity to express something that they couldn't in any other way? The approach was going to be more sophisticated to what we've seen before. I met Davis and we really hit it off. 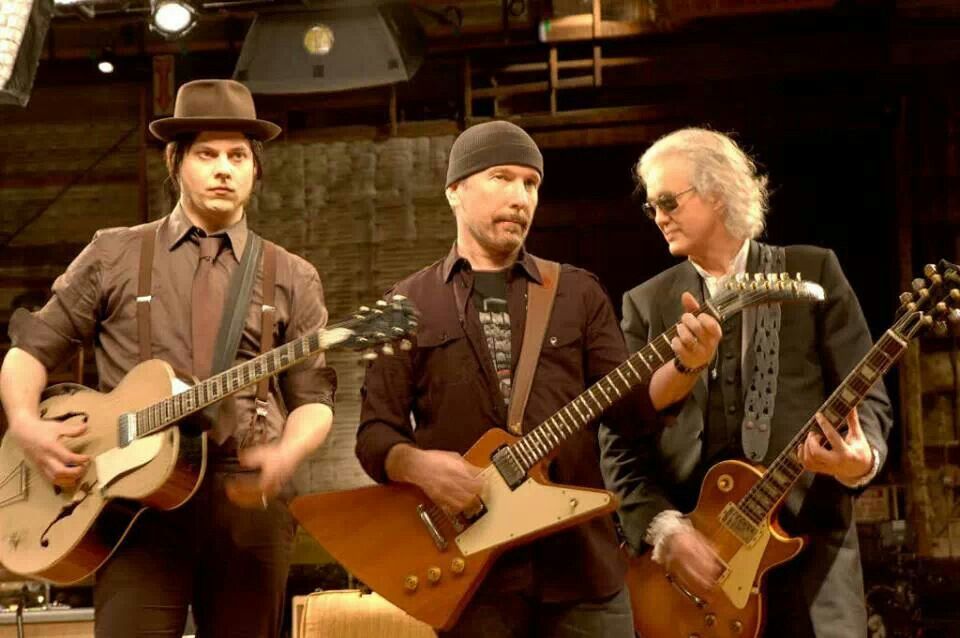 We talked for hours about creativity and the state of the planet. That's when I decided to take the plunge. It seemed a little too 'out there. That spoke volumes to me, for someone to relinquish control and let things happen while the camera rolled. And, of course, when he said Jimmy Page and The Edge…well, what can you say? Page: I knew exactly what Davis was going for. It might have been nice for him to discuss a few numbers beforehand, you know, "Do you want to have a crack at these songs? He wanted to see how we'd relate under unchartered circumstances. None of us had ever played together before, and I think that was interesting, because each of us defines an era, if you like.

Jimmy and Jack, you two had met before, but Edge, was this your first encounter with them? Edge: I had met them before, but very fleetingly. Not even so much as to have a proper conversation.

Jimmy Page, Jack White and Director Davis Guggenheim Interview IT MIGHT GET LOUD

It was more like, "Hello. How's it going? Love your work" - that type of thing. This was my first time sitting down to have a conversation with either of them. Page: The part where we all meet on the soundstage of the Warners lot, it was called 'The Summit. Davis was very keen to have that meeting be a real moment. There was no passing around of notes about what we were going to do or play. Edge: I was just so into the whole thing. I think you can really see that by the look on my face and on Jack's face when Jimmy started playing Whole Lotta Love, which is just the quintessential guitar riff of all time.

“It Might Get Loud” with Jimmy Page, The Edge and Jack White: Director Davis Guggenheim

Or a street sign! But to see the original fingers playing it…it's like going inside the pyramids or something. Jack, at one point early on in the film you make a comment that "technology can be the death of creativity.


Given that both Jimmy and certainly The Edge have made marvelous music with technology - and Edge would probably say that his music wasn't even possible without it - how do you stand by that statement? White: It's a fine line. You can make a great record on Pro Tools, or Pro Tools can be the bane of your existence and destroy anything beautiful you put into it. It takes a lot of restraint and respect to…to keep it pure.

And I think The Edge does that. He uses technology to his advantage. Edge : Anytime you plug a guitar into an amp, there's technology involved.

Davis Guggenheim documents Jimmy Page, the Edge and Jack White in 'It Might Get Loud'

The important thing is that if you use technology to create a unique sound and it winds up being a big part of the inspiration for what you end up playing, then it can be a great thing. Certainly, in my experience, finding a unique sound has been through the use of hardware - the abuse of hardware.

It's not about allowing the technology to dictate your sound; it's about allowing the technology to take you in another direction. There's this word that's thrown around a lot in music: authenticity. The door was open and I was looking at Meg, while we were recording. He was standing there in the hall, and it took me about a half-hour to get him to leave. But, some of the things are obvious in the film and you can actually see them. All those little moments come from that.

After that, all you can do is learn from the techniques and production styles afterwards. That just becomes gravy on top. Jack and Jimmy, what are your feelings on the Guitar Hero video game franchise, which commodifies the creative experience for an entire generation? You have to put it in a video game to get it in front of them. You have to come to my world. What made you decide to take that approach? Part of the film was about childhood, and I just wanted to try to take a different look at it and teach myself how to play guitar.

It would have been easy to show a childhood photo, but harder to try to get somewhere with that idea, so we took the harder route.

How would you approach teaching a child now? How would you help instill that true inspiration for music? Jimmy and Jack, in the film, all three of you started out on inexpensive guitars. If you were giving advice to people who were starting out playing guitar, how important is choosing the instrument? How much difference does it make, to get a top-line expensive guitar, or starting with what you can afford? White: I think starting with whatever you can afford is the best thing to do.

It has to become their own.

From my experience, once I got a guitar that was relatively user-friendly, but not super-duper easy, I really came on as a guitarist, at that point. It helped. Jack, as viewers, we learned about the electric guitar through your personal stories. What did it feel like to reveal things on film that were very intimate to you? Davis handed me a Son House record, when we were filming there. White: I get asked that once in awhile.

Page: There are a number of people. But, maybe I should just write them all down, put them in a hat and then just pick one. How difficult was it to make sure the sound was just right? We wanted Jimmy, Jack and Edge to be totally comfortable with how their music sounded. It did feel like a privilege, but also an awesome responsibility. There are many, many scenes with music that are not in this movie, that are beautiful, and the choice not to include them was really difficult.

We did it a very different way. We started with just these sit-down interviews with Jack, Jimmy and Edge, with no cameras. Then, we brought those home and immediately edited just sound. When I go to London, this is what I want to shoot. It was very, very organic. Documentaries are made in the editing room, really.

Jack and Jimmy, both of you have discussed doing solo albums. White: Joking I think Jimmy needs to practice a little more, before something like that happens. White: Lines are getting a little bit blurred. People are famous for being famous, in this decade. You have to make a choice. There are distractions, all around. You have to make a decision, on your own, what you can take from these people, if you can dig deeper.

This film is letting people dig deeper into the music, let alone the personalities. But, there are things you can dig into with the music and where it comes from. White: Maybe a sense of how things are made. You wanted to write a rock song.